TLDR: Hiked with my parents, had questionable weather, mom attacked by a dog, made the weekend fun anyway.

This weekend, my dad and I decided to meet up in Ashford and do a few hikes near Mount Rainier National Park. We ended up convincing my mom to join too, and we rented a very cute Airbnb about ten minutes away from the Paradise side entrance. The plan was to hike High Rock and either Comet Falls or Pinnacle Saddle on Saturday, then drive through Mount Rainier National Park on Sunday and stop at various viewpoints on the way to and from Paradise Inn. Of course, things don’t always (ever?) go the way you plan.

We got up and left the Airbnb Saturday morning, stopping for coffee and breakfast at Whittaker’s Bunkhouse in Ashford. The drive from the town to High Rock trailhead was only around 16 miles, but it took more than half an hour to drive up the windy road to trailhead. The road has very few potholes, but it was still slow going. There is no official parking lot by the start of the trail, nor is there a bathroom or any other amenities. We would have missed the parking area had other cars not already been parked along the side of the road (luckily, the road becomes wide enough that at least 10 cars can park comfortably).

The trail to High Rock begins with an immediate fork, but the only real option is to take the path winding left–there is a sign up that asks hikers to use the correct trail and not create their own switchbacks up to the lookout. The trail starts out very narrow, and then becomes wider as it winds through the forest. I’m sure that the shade would be much appreciated during the summer. We passed two S&R guys who had been up and down the trail looking for a missing 20-something year old woman–I hope that they find her!

The rest of the hike up is fairly steep, and we took several breaks along the way. There are benches at 0.7 and 0.9 miles, which were quite helpful for determining our pace and distance. Unfortunately, we had heavy fog for almost the entirety of the hike, although we didn’t have any rain. There were a few times we thought the fog might burn off, especially when we saw a glimpse of blue sky peeking out through the clouds, but the weather never really let up. At every viewpoint, we were only able to see a wall of white. The final ascent to the top is very rocky, and has no obvious path up to the lookout. My dad and I made it to the lookout, took a few pictures (of the nonexistent view) and headed back down without staying long at the top. I would definitely like to come back on a clear day. 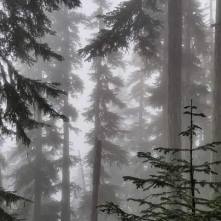 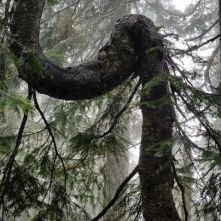 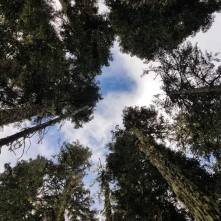 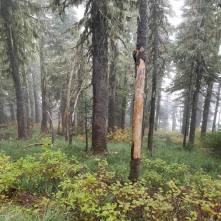 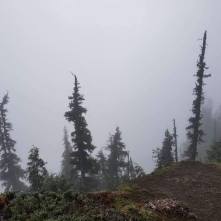 The hike back down was fairly easy, although the rocky parts were a little slippery. We had made it past both benches and nearly made it to the narrow section of the trail when we met a couple with two dogs–a beagle and what looked like a German shepherd mix. When my mom passed the group, the German shepherd lunged at her face and she ended up with multiple puncture wounds on her wrist. I’m not sure what provoked the attack (apparently they had just adopted the dog the day before), but the couple had to grab the dog and restrain him so my dad could pass. We exchanged information, quickly got back to our car, and drove to the nearest ER so my mom could get a tetanus shot and antibiotics. The medical staff were so friendly, and from what I gather the situation could have been much worse. My mom’s fine, and we were still able to make the most of our weekend together.

We had a late lunch at Papa Bear’s in Morton, which has the best pumpkin cheesecake I’ve ever had. Since it was so late in the day, it was clear we wouldn’t be able to do any other hikes. Instead, we drove into the park and stopped at Carter Falls. We didn’t make it to the falls, but we walked out to the bridge, took some pictures and enjoyed the crisp fall weather, then headed to Copper Creek Inn for dinner. Despite the wait, I would highly recommend their restaurant (we ended up going back for lunch on Sunday too)!

On Sunday, we took our time checking out of the Airbnb before leaving around 10am. We parked one car at Whittaker’s, got coffee, and drove back into the park with the intention of doing the breakfast buffet at Paradise Inn. Of course, when we arrived we discovered that Paradise Inn had served their last breakfast of the season exactly one week before. We ended up grabbing very mediocre food at the food court in the visitor center. Afterwards, we decided to stop at several viewpoints in the park, including Reflection Lake and Narada Falls. They were both beautiful!

All in all, we had quite the weekend. I think we made the most of it, and I hope we can come back when the sky is clear (and when there are no angry dogs on very narrow trails)!