I haven’t had a lot of time to hike over the past few months, so when a long weekend came around, I was more than a little excited to hit the trails. Since I was hiking this one alone, I decided to do a hike with fairly steady foot traffic and went with Ira Spring Trail, an out-and-back trek along the I-90 corridor. Recent trip reports indicated that I could leave my microspikes behind, and so I packed my bag with the usual: first aid kit/survival tools, an extra layer, water, snacks and my camera. I met a friend for breakfast before driving out to the Ira Spring trailhead, so I didn’t end up getting to the lot until after 10AM. A big thanks to all the people who worked on the road leading up to the trailhead–there were hardly any potholes, and it was a pretty smooth drive all the way up.  There were already too many cars in the lot, so I parked 0.3 miles up from the trailhead on the left/drop off side of the gravel road.

The trail from the parking lot starts off very flat and wide, an easy walk for over a mile. Almost a mile in, I crossed this waterfall, which apparently used to be a creek crossing before they built the bridge in the picture below. Had the bridge not been constructed, I doubt I would have attempted to cross on my own. Around 1.5 miles in, there’s a clear trail leading up where the “real” hiking begins. I was unprepared for the trail to be as relentlessly steep as it turned out to be! It actually reminded me of Mailbox Old Trail, albeit much more maintained. I leapfrogged with several groups of hikers on my way up, and many faster parties passed me on the long incline. 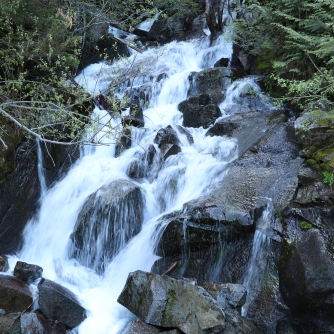 Throughout the climb up, I was rewarded with alternating peek-a-boo views of the surrounding mountains and blissfully cool pockets of shade. Luckily, the sun was only blazing for the beginning section of my hike, and it made it much easier to ignore how much I was sweating by the time I reached the main fork in the road at 3 miles in. Here, there is clear signage giving hikers several options: continue up for Bandera Mountain, or veer left for Mason Lake. I figured I might as well try to make it to the top of the mountain, since I was already there and it couldn’t be that difficult, right? I was very wrong. The climb up is a brutal, seemingly near-vertical incline where I fell once going up trying to get stable footing. By the time I reached the next section, the sky had grown overcast and it was much too chilly for me to justify venturing further. However, the views were spectacular from what I saw, and although I turned around about 0.75 miles up it was breathtaking. After turning back, I passed several more prepared groups who were planning on making it to the summit and walking along its spine.

The way down was treacherous but doable, and I carefully made it back to the sign where I started down the trail to Mason Lake. This trail was a huge relief after trying to make it up to the summit–a short half-mile jaunt down to the basin, where the only obstacles were small patches of packed snow. As of this weekend, these patches only require treading carefully and hikers do not necessarily need spikes or poles to cross. Here, I saw multiple groups of overnight campers who were listening to music and dancing. There is still ice on the lake, but it will likely be melted within the next month. It was a beautiful place to sit down, relax and take some pictures.

By the time I made it back to the junction for Bandera Mountain/Mason Lake, it was already 1:30PM, and my GPS estimated it would take me 1 hour 18 minutes to reach the trailhead. I was already so ready to get back to the car that I decided to jog the entire way down, making it back in just under an hour. When I finally reached the parking lot, there was only a handful of cars remaining. After slowly walking the 0.3 miles to my car, I finally left the trailhead around 2:40PM.

All in all, I’d say this was a great hike and I will probably come back to tackle the scramble up Bandera Mountain when I’m more prepared. I would also love to camp at Mason Lake, sleep under the stars surrounded by nothing but mountains and water. 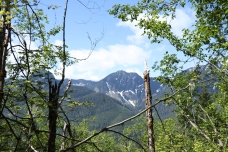 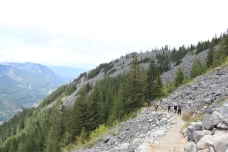 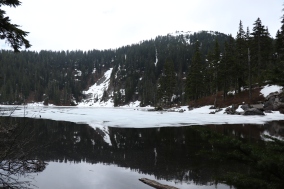